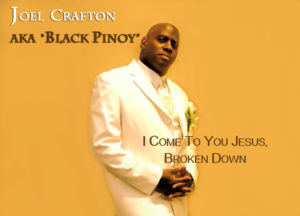 “I COME TO YOU JESUS, BROKEN DOWN”
Artist Joel Crafton aka ‘Black PINOY’

Joel Crafton is known for his smooth and romantic lyrics in R&B that has taken him around the world as a dedicated artist, producer and song writer.

He completed a six-month music tour in Singapore 2017, and relocated from New York to North Carolina where he opened his state of the art recording studio.

Joel Crafton was signed with EMI panoramic records as an artist producer which also signed the hit group Ray Goodman Brown.  Joel Crafton released various songs that gained international exposure, “If I could Look Inside Your Mind” and “She’s Sleek She’s Fine”. He also coordinated a Kodak commercial, and was credited on the American Music Awards, appeared in the movie Something Borrowed starring Kate Hudson.

I Come To You Jesus, Broken Down – promo snippet